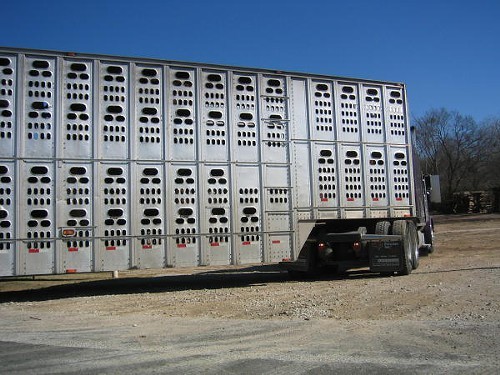 Return to Freedom is proud to support the bipartisan Horse Transportation Act of 2017, introduced on Thursday by Reps. Steve Cohen, D-Tenn, and Walter B. Jones, R-N.C.  The bill would prohibit interstate transportation of horses in a motor vehicle containing two or more levels stacked on top of one another.

“When we allow animals to be mistreated or disrespected, we also devalue our own humanity,” Rep. Cohen said in a press release. “Horses cannot be safely or humanely transported in double-deck trailers that are built for much smaller animals, and our laws should reflect that. I am proud to sponsor the Horse Transportation Safety Act, which will ensure that these beautiful creatures are treated humanely.”

Added Rep. Jones, “As a longtime owner of horses, I know the importance of safe and secure transportation for these precious animals. Double-deck trailers and similar motor vehicles are not it. Horses are incredible creatures that deserve the most humane treatment. Thank you Congressman Cohen for introducing legislation to ensure just that.”

The legislation would close a regulatory loophole whereby drivers have an incentive to inhumanely transport horses to assembly points, then reload them into single-level trailers just outside their final destination to avoid being caught. It would also create civil penalties of at least $100 for each horse involved.

On Nov. 7, 2007, the U.S. Department of Agriculture issued a statement recognizing the inhumane practice, stating that, “double-deck trailers do not provide adequate headroom for equines, with the possible exception of foals and yearlings. We don not believe that trailers that have two or more permanent levels that are no collapsible can be be adequately altered to accommodate adult equines, especially tall equines.”

Previous legislation successfully banned the use of double-deck trailers to transport horses to slaughter. HR 4040 would ban their use for any reason.

Other organizations endorsing the bill include the Animal Welfare Institute, the Humane Society of the United States, and the National Black Farmers Association.