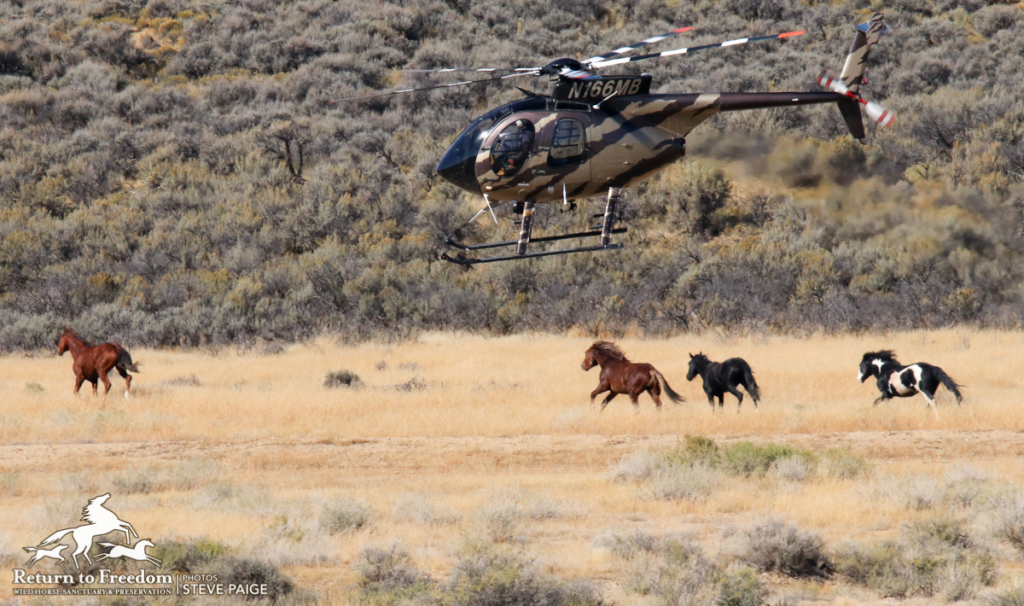 A contractor’s helicopter pushes wild horses toward the trap on Oct. 4 at the Salt Wells Creek Herd Management Area in Wyoming. Photo by Steve Paige.

As Congress prepares to resume the debate over whether to allow the Bureau of Land Management to kill healthy unadopted wild horses and burros, the agency on Thursday used a pair of helicopters to capture 65 adult wild horses and 14 foals at the Adobe Town Herd Management Area in Wyoming.

In all, 1,516 wild horses have been captured in helicopter drive trapping at the Salt Wells Creek / Great Divide Basin / Adobe Town heard management areas in southwest Wyoming’s Checkerboard region, according to BLM.

The Senate Appropriations Committee was scheduled to vote on the Interior Appropriations bill, which includes the Wild Horse & Burro Program, on Oct. 19, but the hearing has been delayed. Watch the RTF website, Facebook page and Twitter feed for updates.

The total captured in Wyoming thus far includes 298 foals and weanlings. In an unusual move, BLM began the roundup not counting wild horses under about age 1 against its goal of removing 1,560 from their home range.

BLM has since agreed to halt operations at 1,560 wild horses captured — including foals — until a federal judge rules on a preliminary injunction filed by American Wild Horse Campaign and wildlife photographers Carol Walker and Kimerlee Curyl. The co-plaintiffs are accusing the agency of violating federal laws by excluding the young wild horses from the count.

BLM only began releasing a tally of foals captured after RTF’s humane witness, Steve Paige, and others raised questions about whether they were being counted.

Thirteen wild horses have died since the roundup began, each one euthanized for what BLM says was a preexisting condition with “a hopeless prognosis for recovery.” On Thursday, a buckskin colt “with severe scoliosis from past injury” was put down. No veterinary reports have been posted.

The agency set out to capture:

Both the corrals in Bruneau and Axtel are privately owned facilities, closed to the public, which the AWHC and its co-plaintiffs also take issue with in their lawsuit.

The three HMAs are part of Wyoming’s Checkerboard: a largely unfenced region alternating blocks of public and private or state land. The roundup is set to take place over a combined 1.7 million acres of public land and 731,703 acres of private land.