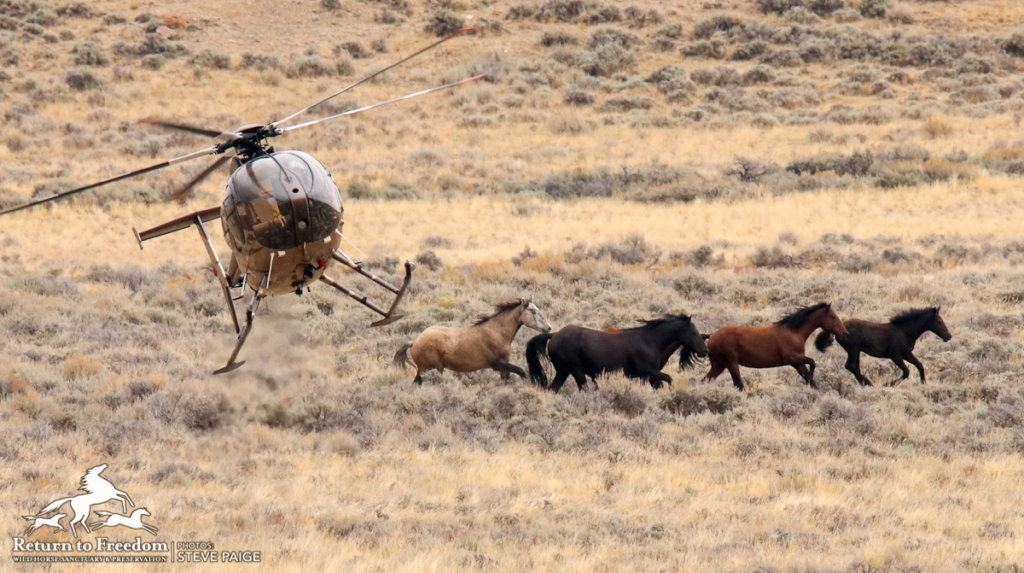 A contractor’s helicopter forces wild horses toward the trap site on Sept. 29 at the Great Divide Basin Herd Management Area in Wyoming. Photo by Steve Paige.

Oct. 17 update: The Senate Interior Subcommittee and full Appropriations Committee have delayed their hearings. We’ll update you when they reschedule. The good news is that this again gives us more time to log calls with Senators. Please don’t let up!

A helicopter roundup that has seen 1,560 Wyoming wild horses captured will continue after a U.S. District Court rejected a preliminary injunction filed requested advocates because the agency has not been counting foals.

The co-plaintiffs argued that BLM was diverting from past practice by not counting foals and weanlings against its goal of removing 1,560 wild horses from the Salt Wells Creek / Great Divide Basin / Adobe Town herd management areas in southwest Wyoming’s Checkerboard region.

BLM only began releasing a tally of foals captured after RTF’s humane witness, Steve Paige, and others raised questions about whether they were being counted. Earlier this week, BLM agreed to stop the roundup at 1,560 total horses pending the court’s ruling.

On Friday, BLM captured 26 adult wild horses and 18 foals at the Adobe Town Herd Management Area, bringing the number captured since the roundup began to 1,244 adult horses and 316 foals.

The agency reported no deaths or injuries, keeping the number of wild horses that have died at 13 — each one euthanized for what BLM says was a preexisting condition with “a hopeless prognosis for recovery.” No veterinary reports have been posted.

The House’s version of the Interior bill, already approved, includes an amendment that removed protective language. That will open door for BLM to euthanize — shoot — healthy unadopted wild horses and burros if the Senate does not stand in the way.

In Wyoming, BLM  set out to capture:

Both the corrals in Bruneau and Axtel are privately owned facilities, closed to the public, which the AWHC and its co-plaintiffs also took issue with in court.

At roundup’s end, 21 mares are to be released after being collared as part of a movement study. BLM’s Friday report notes that 50 wild horses were “gathered” as part of the study, but it is not immediately clear whether those horses were otherwise counted and whether they included mares collared last winter.