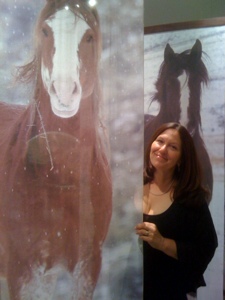 Elissa was born in NYC and grew up in Hollywood. After a decade in NYC and Los Angeles, managing recording studios, Kline and her family moved to a ranch in rural Idaho owned by the singer songwriter Carole King and lived there and managed the ranch for 20 years.

In 2004, after a friend witnessed a round up, she began photographing the wild horses near Challis, Idaho. She has shown her work in galleries all over the West and uses these exhibits to educate the public about the plight of America’s wild horses.

She met Return to Freedom Wild Horse Sanctuary founder, Neda DeMayo, in 2005, just after the Sale Authority amendment was added to the Wild Horse and Burro Act. DeMayo was a guest speaker at the Ketchum Idaho Rotary Club and worked with the heartbroken community to deliver handwritten letters to the Secretary of the Interior on behalf of RTF’s newly formed American Wild Horse Preservation Campaign (AWHPC).

In 2009, she photographed another devastating round up of the herd she came to know so well. Elissa partnered with two other women to rescue 19 mares from the holding pens, many of whom were pregnant. In 2011, 29 Challis rescue horses were relocated to Return to Freedom.

Kline lives in Santa Cruz, CA, with her husband Erik Gillberg and 18-year-old son Ian and is a passionate wild horse advocate. She is honored to sit on the Board for Return to Freedom.