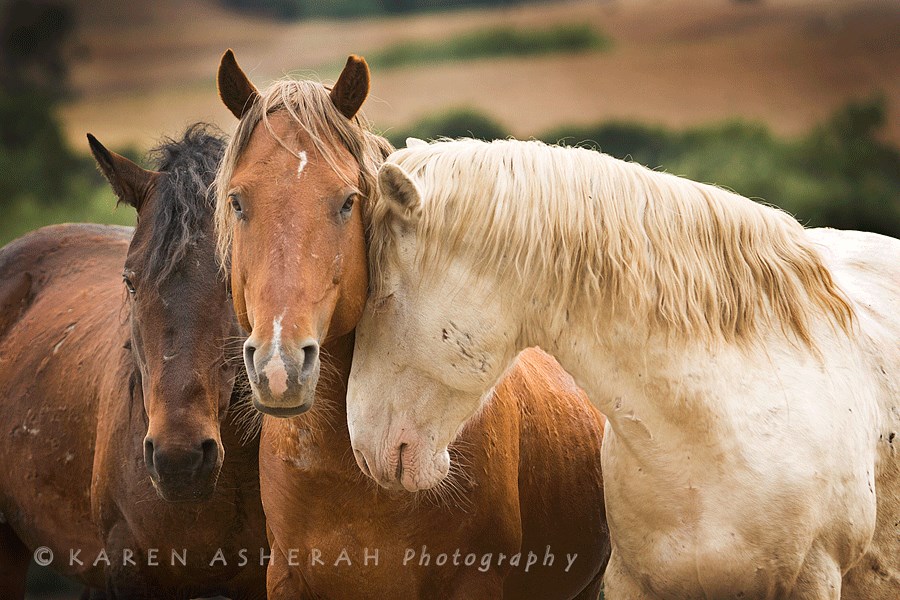 Galahad is a robust chestnut stallion, captured in 2010 from the Silver King Herd Management Area in Northwestern Nevada’s Great Basin. 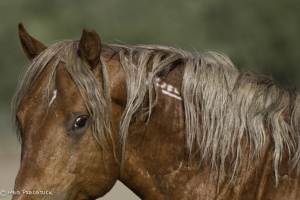 In the legend of King Arthur, Galahad was always known as the “Perfect Knight”. He was the very picture of nobility, purity, courage, gentleness, courtesy, and chivalry. It was Galahad who found the Holy Grail.

For these reasons, it is also the name given recently to a heroic chestnut stallion, when he and his family were captured in the Silver King roundup on October 3, 2010.

Stampeded by deafening helicopters, and chased relentlessly over dangerous terrain, Galahad’s lead mare, Hope, the queen of the herd, sustained a serious wound, her face ripped open in the chase.

After the helicopter assault, Galahad and his mares and foals were forced into a trap at the capture site, where they were held in a pressure-cooker situation with two other bands in the same small enclosure. In the ensuing chaos, Galahad bravely fought off the other stallions for five hours to protect his injured mare– losing the rest of his family band– his other mares and offspring — as a consequence of his dedication to his hurt lead mare. 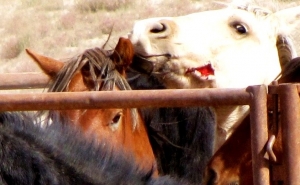 After 5 hours Galahad fights without rest, only to loose his mare and colt while BLM contractors ‘process’ the horses, sorting by gender and age and loading them into separate semi-trucks to various holding facilities. He sacrificed the others in his band to protect her, and lost her anyway . . .

Galahad’s story is an awakening for us, clearly showing us the strong emotional bond that exists in the relationships between horses. In an inspiring demonstration to us of the loyalty that leadership horses have for their band mates, Galahad risked all to honor his responsibility as lead stallion to protect his herd. Even in the trap that robbed him of his freedom, he lived up heroically to his famous Knight’s name. 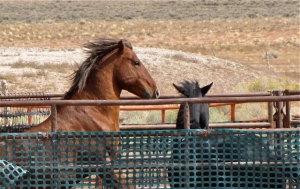 We can only imagine the terror, desperation and powerful will to survive and to protect that filled Galahad’s mind and body, and the sense of impending loss at the unfolding destruction of his family band—his very reason for living.

No horse should ever be put through that.  Return To Freedom, will continue to do what we can to ” save the pieces”. Whether it is a bonded family or the conservation of a disappearing strain of America’s equine heritage.

What Galahad could not know, as he paced and fought and defended his mare in that trap, or as he was separated– seemingly forever– from his world, was that there were people  determined to protect him, just as he had protected his family.

He could not know that an unseen army of people, who care deeply about him and every American Wild Horse, were already at work to undo as much of the harm as they could— to roll back the injustice as far as was possible, and to work ceaselessly until the injustice stopped forever.

While we at Return to Freedom work every day to achieve total protection for all the free-roaming horses, it is important that we seize the individual victories we can along the way. They not only mean everything to the horses whose lives are changed by our help, but they also inspire us and keep us going—they are concrete proof that things don’t have to end in tragedy for the wild horse. 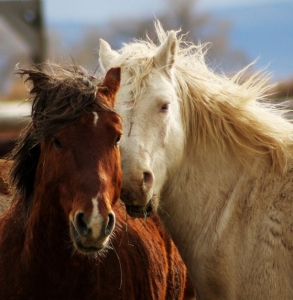 Galahad with SilverKing in Holding. Galahad is still to this day protective of Silver King!
Photo: Laura Leigh

Thanks to the support given to our work by caring people all over the world, we found a way to undo one terrible injustice—the seeming total loss of Galahad’s family.

Thanks to a determined ally, Laura leigh, Galahad was followed to Gunnison Prison.  Through the chutes and onto the semi-trucks to the prison, he stayed very close to a white stallion named Silver King who Leigh had also been tracking through the capture. Laura Leigh alerted Return to Freedom and we were able to get possession of Silver King and Galahad.

Note: In order to simply view Galahad and Silver King, Leigh endured an intensive search of her person and vehicle. Only after that was she allowed to view the horses. Later Leigh received notice that if she was to accompany the driver picking up the horse she had to notify BLM so they could notify S.W.A.T. These actions on the part of BLM were included in Leigh’s monumental win against violations of her first amendment rights in the Ninth Circuit. This has increased accountability and transparency related to wild horse handling during roundups an processing.

RTF tracked down Galahad’s cherished mare, Hope, and his beautiful, curious son, Sterling and moved them to a leased holding area in Nevada. 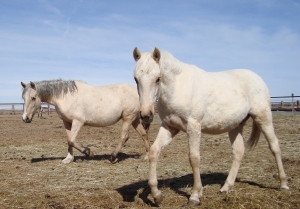 Hope and Sterling in a holding pen.
Photo: Deniz Bolbol

When Galahad spotted his family on the other side of the facility, he immediately began running purposefully to greet them with excited cries of recognition. Now– against all odds– the trio are safe.

Since 2011, RTF has had to board the mares from both the Silver King and Calico roundups, at our colleagues, Dreamcatcher Sanctuary in Termo California. Sterling along with the stallions came to RTF’s sanctuary but the mares have been roaming 800 acres in northern California.

This Holiday season, we will be able to reunite Galahad with Hope (and two other bay mares he lost in the roundup) at Return to Freedom’s American Wild Horse Sanctuary, San Luis Obispo, California location! 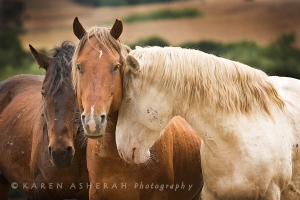 Silver King Round Up-Death of Braveheart

We can’t do this work without you. YOU make it possible for Return to Freedom to save horses who have been removed from their home in the wild and offer them a safe haven where they can live out their lives in large pastures with their herd groups.

Our Sponsor a Horse program is an automatic monthly donation program. It only takes a moment to sign up and your debit or credit card will be automatically billed each month. You can cancel at any time.

Be a Partial Sponsor

We can’t do this work without you. YOU make it possible for Return to Freedom to save horses who have been removed from their home in the wild and offer them a safe haven where they can live out their lives in large pastures with their herd groups.

Our Sponsor a Horse program is an automatic monthly donation program. It only takes a moment to sign up and your debit or credit card will be automatically billed each month. You can cancel at any time.

Be a Full Sponsor