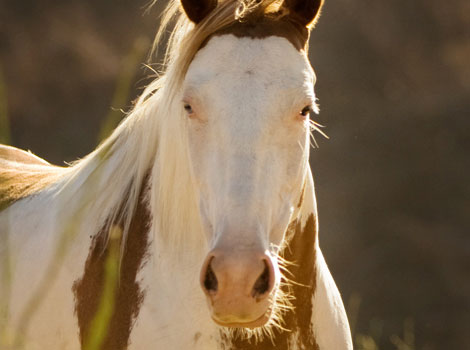 Isadora-Cruce is a rare brown-and-white spotted medicine hat overo mare. She was born at Return to Freedom’s American Wild Horse Sanctuary in July 2002. Both Isadora’s Dam and Sire were from the original horses discovered and gathered from the Wilbur-Cruce Ranch in Southern Arizona when it was sold in 1990. Isadora’s Dam, Sonora (see photo and bio below), was an extremely intelligent and cautious lead mare. Her father, Francisco-Cruce, was a very calm and affectionate stallion, also a medicine hat overo.

Isadora was named after the innovative dancer, Isadora Duncan. When Isadora was a young filly, she would be seen frolicking in the last rays of the sun as they filtered into her pasture at the end of the day.

These strong and reliable horses are direct descendants of Padre Kino’s original herd who arrived in America from Spain in the late 1600s.

Padre Kino arrived in Mexico in 1681 as a missionary and established a string of missions in the American Southwest. His main headquarters was the Mission Delores in Sonora Mexico where he became known for bringing the highest quality livestock over from Spain. Among his many talents, Padre Kino was a rancher and became dubbed the ‘Priest on Horseback,’ introducing cattle, mules, and horses to his parishioners and expanding their skills with architecture and ranching.

In 1885, a man named Dr. Reuben Wilbur purchased a herd of the horses originating from Rancho Delores. They were then isolated on the Wilbur-Cruce Ranch in southern Arizona for almost 100 years.

One notable difference with the Wilbur-Cruce strain, apart from other known strains of the Colonial Spanish horses, is that the population has always been privately managed, resulting in horses whose genetics are uninfluenced by modern breeds. This cannot be said of many other groups of horses with similar ancestry. They are the only known ‘rancher’ strain of pure Spanish horses that persists in the southwest. The Cruce population is a most significant discovery of a type of horse largely thought to be gone forever.

The historical and genetic value of these horses was recognized, and because of Dr. Wilbur’s granddaughter, Eva Cruce, and the American Minor Breeds Conservancy, the horses were placed into a program with conservation breeders in 1990.

Now referred to as the Wilbur-Cruce horses, they are part of Return to Freedom’s conservation efforts, and — along with the Sulphur Springs herd, the Choctaw horses, and other strains of Colonial Spanish horses — represent some of the original Spanish barb horses who returned to our continent some 500 years ago and were the foundation of what was called The Spanish Mustang in America. 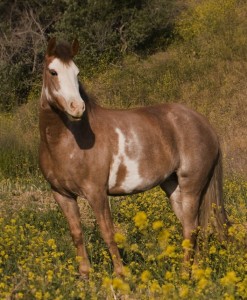 The 1800s brought on the invention of barbed wire and the expansion of cattle ranching across the plains and the Northwest. Except for a few small herds and private conservation efforts, the original Spanish mustangs have almost all been destroyed.

Today, the American Mustang comes in all shapes and sizes. America’s wild horses, like the American people, represent the history of this nation.

Whether they are undiluted strains of the early Spanish horses, or those that have interbred with cavalry horses, draft horses, and ranch horses from the 1800s, they have returned to a natural state and continue to adapt to their environments. The wild horses of today are significant culturally and biologically. We would not enjoy many of the breeds we have today if it were not for some of the original little horses who returned home some 500 years ago.

The ancestors of today’s wild herds have shaped our culture forever … and now they need our help. Although some of them adapt to domestication, thousands continue to suffer.

Isadora, her sister, Ines (see above right), and four other Wilbur-Cruce horses live at Return to Freedom’s American Wild Horse Sanctuary in Santa Barbara County, California. Return to Freedom is dedicated to preserving the freedom, diversity and habitats of America’s wild horses through sanctuary, education, and conservation, while enriching the human spirit through direct experience with the natural world.

Return to Freedom works locally and nationally, on behalf of these complex and magnificent creatures, who embody a significant piece of our cultural heritage.