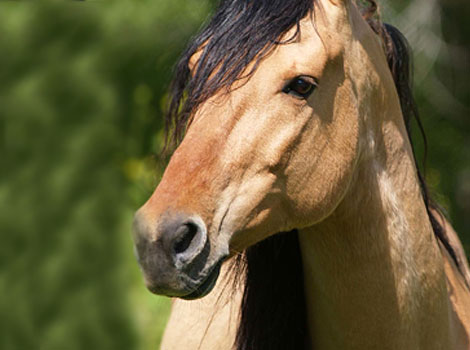 Spirit: Stallion of the Cimarron. 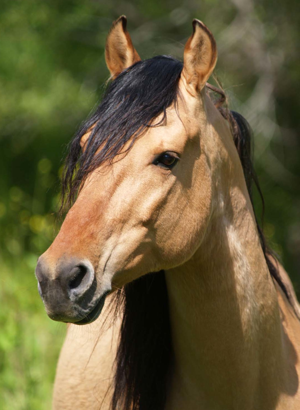 Spirit was used as an inspiration and model for the artists and animators during the making of the 2002 DreamWorks animated film Spirit: Stallion of the Cimarron. The film, based on a script about a wild mustang written by John Fusco, a long-time figure in the mustang community, and was a combination of hand-drawn, traditional animation and state-of-the-art computer animation.

In April 2002, after completion of the film, DreamWorks relocated Spirit to Return to Freedom Wild Horse Sanctuary, where he serves as a prominent ambassador of the Kiger Mustang breed. At his new home, Spirit will be able to spend his days exploring large pastures at the Sanctuary and enjoying new friends. We are delighted to create a new home for Spirit where he can continue to thrive and inspire our visitors to preserve the heritage of these magnificent animals. 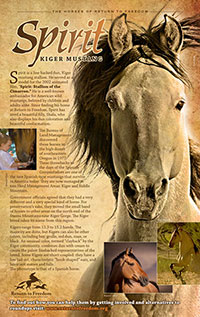 The Bureau of Land Management discovered the Kiger horses on the on the high desert of southeastern Oregon in 1977. Government officials agreed that they had found very unique horses. To preserve them, they moved this small band of horses to other areas on the north end of the Steens Mountain near Kiger Gorge. The Kiger breed takes its name from this region.

Kigers range from 13.3 to 15.2 hands. The majority are duns, but Kigers can also be other colors, including bay, grullo, red dun, roan, or black. An unusual color, termed “claybank” by the Kiger community, combines dun with cream to create the palest line-backed representatives of the breed.

Some Kigers have white markings, but excessive white is discouraged. Kigers are short-coupled: they have a low tail-set, characteristic “hook- shaped” ears, and luxuriant manes and tails. The phenotype is considered, by many, to be of a Spanish horse.

Area of origin: Although Spirit was ranch-bred in Bend, Oregon, the Kiger Mustang originates in the Kiger/Riddle Herd Management Areas of Steens Mountain, on the high desert of southeastern Oregon.
Breed: Kiger Mustang
Color type: Dun with dorsal stripe
Birthday: Spirit was born May 8, 1995
Came to Return to Freedom: April 2002

How old is Spirit?

Where was he born?

Spirit was born in captivity by a horse breeder in Bend, Oregon.

How tall is he?

Spirit is 4 feet, 11 inches at the top of his shoulders, or 14.3 hands high. Traditionally, a horse’s height is calculated in “hands.” One hand is equal to four inches — the average width of a man’s hand. This method was created when cowboys had to measure horses, but didn’t have any rulers. Most Kiger mustangs stand 13.3 to 15.2 hands high, or 4 feet 7 inches to 5 feet 2 inches at the top of the shoulders.

Are Mariah and Rain real horses?

The artists were inspired by various horses that they knew. For Rain, the creative team drew their inspiration from a very sweet medicine hat mare. They loved how feminine she was and her soft blue eyes!

No. Spirit was born on a ranch in Bend, Oregon. Spirit is free and is a wonderful ambassador and bridge to help educate children about the various breeds of America’s wild horses. He enjoys people and especially children.

Does he have a herd of his own?

Since Spirit was not born in the wild, he was not born into a herd. Here at Return to Freedom he is being socialized with wild horses so that he can live freely with them. So far he has been introduced to several mares.

What is his life like at Return to Freedom?

Spirit has a great life here, and has the best of both worlds of freedom and captivity. While he is being introduced to some of the wild horses at the Sanctuary, he also has his freedom. Spirit has many friends — human and horses alike. And because he is in a sanctuary, he has the care that he and all his friends need and deserve.

Why did DreamWorks choose Spirit as they model?

DreamWorks’ filmmakers and artists were very specific about the kind of horse they needed as a model for their film. And Spirit met all of their criteria.

They knew they wanted to find a beautiful and majestic Mustang — a true symbol of the untamed American West. And when they first laid eyes on Spirit, they knew they had found the creature that would give them the inspiration to tell a compelling story about a wild mustang stallion and his fight for freedom.

Spirit was also chosen because he has a great personality and the way he moved was truly beautiful. He is playful and interacts very well with people. And that was really important because he posed many, many times so the animators could sit and draw and study him for hours on end.

Where can I learn more about Kiger Mustangs?

The Bureau of Land Management discovered the Kiger Mustangs on the high desert of southeastern Oregon in 1977. Government officials agreed that these were very unique horses. To preserve them, they moved this small band of horses to other areas on the north end of the Steens Mountain near Kiger Gorge. The Kiger breed takes its name from this region. We have provided a number of links to sites that are dedicated to Kigers. We invite you to read more.