Velma Johnston was a Nevadan of pioneer heritage, born in Reno , March 5 th , 1912 , oldest of four, to parents Joseph Bronn (saved as an infant by the milk of a mustang mare coming across the deserts in a covered wagon) and mother Gertrude Clay. Her father operated a freighting service using many horses, some of mustang lineage. In 1923 at the tender age of 11, she became disfigured after having to spend months in a cast in a San Francisco hospital when being treated for polio. This experience gave her great empathy for confined and suffering animals. Having much time to herself in her youth, she devoted her time to caring for animals on her parents’ ranch. She avidly pursued learning but was often cruelly taunted by children in her classes because of her disfigurement. She greatly enjoyed composing poetry and drawing. She married a neighbor, strong, six-foot four inches tall, Charlie Johnston, part Delaware Indian, who took over her father’s ranch along the Truckee River near Wadsworth (the Double Lazy Heart Ranch). Unable to have children of their own, Velma and Charlie operated a sort of dude ranch for children which included many troubled city youth. This experience gave them great joy. For over forty years she worked as a secretary for Reno insurance executive Gordon Harris. In 1950 one morning while driving to work, Velma witnessed a gruesome scene – wild horses crammed into a truck destined for a pet food slaughterhouse. Blood oozing from the truck revealed a yearling being trampled to death. She decided to expose this to the public eye. The massive wild horse and burro clearances from the Western public lands of the mid-1900s involved airplanes and many WWII pilots. They operated in conjunction with truck drivers and were aided by cowboys with lassoes and heavy truck tires.

Being an astute executive secretary, Annie set about amassing a legion of facts and evidence which she neatly organized into very effective presentations to all economic and social branches of society. She adroitly cultivated many contacts, from school children to ranchers to businessmen, biologists, and politicians. Both a charming and a commanding public speaker, she delivered her message with passionate conviction, inspiring a sense of justice and compassion for the wild horses in her listeners. She began her campaign in her home Storey County . Here it was in 1952, with help from prominent citizens and after fiery meetings in Virginia City , that she earned her nickname, “Wild Horse Annie”. In 1955 her campaign in the Nevada State Legislature led to a bill banning aircraft and land vehicles from capturing wild horses on state lands. Unfortunately this left the wild horses on 86% of Nevada lands, as well as on the public lands of other Western states, unprotected, since these lands were largely under federal jurisdiction. Seeing that these indiscriminate wild equid gatherings continued to supply the pet food industry, indefatigable Annie aroused public indignation and support for the first federal law to protect wild horses. This was accomplished in 1959 with support from Nevada ‘s U.S. Representative Walter S. Baring. 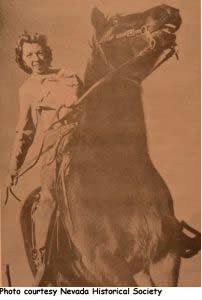 It prohibited the use of any form of motorized vehicles as well as the poisoning of water holes done either to capture or kill wild horses. It is known as the Wild Horse Annie Act (P.L. 86-234). By the mid-1960s it became apparent that P.L. 86-234 was not enough since wild horses continued to rapidly lose ground in the West. Of pivotal importance in Annie’s determination to continue with the fight was the failure to obtain conviction for a well-documented violation of the Act involving a wild horse roundup in Central Nevada and subsequent shipping of the animals to a Fallon slaughter house. This inspired her all the more to bring justice for the horses. She felt strongly that they had a right to remain in viable numbers on the public lands.

In spite of her husband Charlie’s untimely death from emphysema and by means of a meticulously organized campaign involving many audio-visual presentations to schools and civic gatherings, plus a wide-spread letter writing and illustrated fact sheets distribution, Annie convinced thousands of people of all ages and walks of life to advocate for the wild horses. Congress received more letters on this issue than any other, save the Vietnam War. Annie herself testified before Congress. The result was the Wild Free-Roaming Horse and Burro Act (P.L. 92-195) which was unanimously passed and signed into law in 1971. This gave the wild equids protection on BLM and Forest Service lands “where found” at the time of the passage of the Act in 303 areas.

Another of Annie’s major accomplishments was to see the establishment of special wild horse refuges, some coming before the Act. The largest such refuge, established in 1966, lies within the vast Nellis Air Force Base in southern Nevada . The historically significant Pryor Mountain refuge, established in 1968, on the Montana-Wyoming border, and picturesque Little Bookcliffs refuge (dedicated to Annie) near Palisade, Colorado , are two other such sanctuaries. During her lifetime, Annie and her dedicated assistants kept a rigorous vigilance on the equid herds to assure their fair treatment. The files of the two organizations she established, the International Society for the Protection of Mustangs and Burros (established before the 1971 Act) and Wild Horses Organized Assistance (established after the 1971 Act), include meticulous field notes (many by Annie herself), maps and photographs of horse/burro spottings (along with individual descriptions of the animals and their activities), witness testimonies, and other documents. After her husband’s death, Annie lived with her mother “Trudie” in her home overlooking Reno where she loved to garden. But her standing up for the wild ones had made her the subject of many vicious attacks, including threats to her life. On June 27 th , 1977 , she passed away after bravely fighting a losing battle with cancer. She was 65 years old.